More than 81,000 soldiers fought at the Battle of Stones River leaving almost 24,000 dead, wounded or captured. Union artillery positioned along Nashville Pike held back the Confederate forces on the last day of 1862. The Confederate charge was destroyed by fire from 57 Unions cannons. During the 150th reenactment on December 29, 2012 as shown in the video above 6 cannons fire 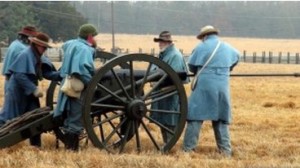